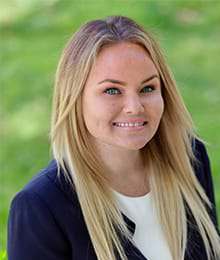 Jessica Danielski is an experienced trial attorney dedicated to advocating for those who have been injured by the wrongful acts of others.

Prior to joining Hildebrand McLeod & Nelson LLP as Of Counsel, Jessica was an attorney at a well renowned creditor’s rights law firm, where she represented some of the largest banks in the nation, in all aspects of litigation in state and federal courts. During her time there, Jessica handled numerous anti-SLAPP motions to strike, prosecuted contested trials, participated in several appeals and presented a Continuing Legal Education seminar.

Jessica honed her trial and litigation skills as a solo practitioner when she opened her own law practice in 2017 and joined Hildebrand McLeod & Nelson LLP as a contract attorney. As a solo practitioner, Jessica represents numerous clients in civil litigation. Jessica also handles numerous record clearance applications (e.g., expungements, certificates of rehabilitation and/or governor pardons) for rehabilitated persons affected by the criminal justice system.

Jessica’s passion to defend the rights of railroad workers and others in their times of need grew exponentially since she started working with Hildebrand McLeod & Nelson LLP in 2017. So, in 2019 Jessica joined the firm as Of Counsel so that she can dedicate more time to those in need.